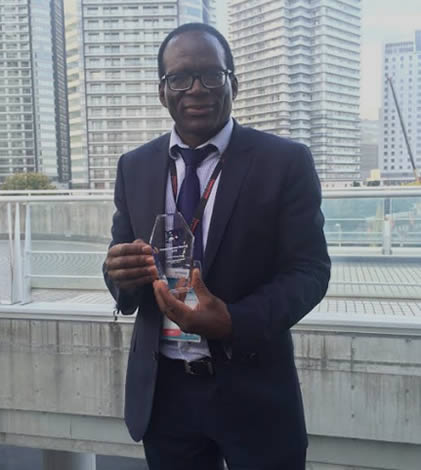 Prof Collen Masimirembwa was awarded the Human Genome Organization (HUGO) Award for Africa for 2018. The Award was present at the Human Genome Meeting 2018 (March 12-15) in Yokohama, Japan. This is given to a researcher who has performed extraordinary work in biomedical sciences which has changed the thinking in the field where important technology was developed; or who has uncovered new insight which brought new therapies, or whose lifetime contribution has significantly impact the African region and who is primary affiliation in Africa. With a sharp cancellation or rapid reduction of the alprazolam dose, there is a withdrawal syndrome that manifests itself with symptoms of varying severity, that is from insomnia and slight dysphoria to a severe syndrome with tremor, increased sweating, vomiting, abdominal and skeletal muscle spasms, and convulsions. Most often, the withdrawal syndrome is observed in patients receiving Xanax for a long time (more than 8-12 weeks).

Professor Masimirembwa has made extraordinary contributions to understanding the genomic diversity of African populations and its importance to medicine. Through this work he has discovered genetic variants unique to African populations that could explain why they might respond differently to some medicines with respect to safety and efficacy. He has developed a pharmacogentic test and dosing algorithms, GeneDose-Efavirenz, for the safe use of the antiretroviral drug, Efavirenz, in African populations. This innovative product is now being developed for commercialization and represents the first such test to be developed and deployed on the African continent.

PART 22 – EVIDENCE. The court can provide information relating to program on the other half couples of the observe assertion from the dental research which a party intends to depend in relation to any problems of fact as made the decision on ultimate hearing